Last month, Magnum reported the death of member Martine Franck, widow of Henri Cartier-Bresson, a founder and its most famous member. The organization now has no direct link to its patriarchs for the first time in 65 years—and operates in a world of journalism far different from the one Magnum confronted in 1947.
In that year, four photojournalists got together to report on stories that the conventional press might not care about, and to share the profits. They called themselves Magnum. Over the years, more photographers were admitted to their elite crew. 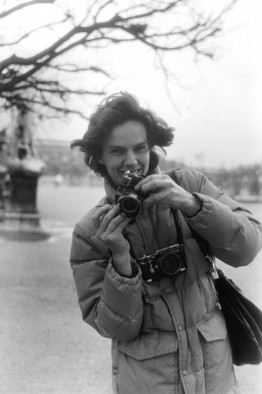 Succession Willy RONIS/Diffusion Agence RAPHO/Gamma-Rapho/Getty Images
Martine Franck, the late widow of Henri Cartier-Bresson, date unknown.
Their romantic, impossible project came with obvious problems. Magnum photographer Werner Bischof despised reporters "who see only what might shock the world press," calling them "vultures of the battlefield." At the same time, founder and war photographer Robert Capa, with his genius for selling Magnum stories to the press, told another colleague, "if you want to do sad stories, you have to get nearer the news."
That constant tension has driven the profession of photojournalism since it began. While those beginnings are murky, the industry was well under way by the end of World War II, as picture magazines like Life and Paris Match appeared all over the world. Some Magnum members defended their great, unsalable work as art. And some dismissed the artists as self-righteous jerks. (Every family has its quarrels.) But the argument was not so much between journalism and art as between good pictures and the good pictures that someone would pay to publish. Capa and Cartier-Bresson both made great pictures that sold, setting an example difficult to match. Though it didn't stop anyone from trying, and even succeeding. And Magnum kept all its members' photographs in an ever-growing archive.
For more than two decades, even after the advent of television, there was lots of work. Magazines had big glossy pages and space to fill with pictures telling stories. (The tradition still survives in People and National Geographic.)
When the U.S. magazine market declined in the 1960s, Magnum members, like all photojournalists, found new publications. They developed the lucrative specialty of working for corporate clients in the days when corporate reports were new. And they could always shoot ads.
Magnum survived the death of Life magazine thanks to Cornell Capa, younger brother of Robert, who had died in Vietnam in 1954. In 1967, Cornell arranged an exhibit of 200 photographs by his brother and five others for the eclectic Riverside Museum in New York. In those days most museums and the public didn't consider photography art. Unlike Abstract Expressionist paintings or ironic Pop Art, photographs had clear subjects. Fine prints were made in limited editions, but a photographer could print more pictures any time he liked.
The last qualifier didn't apply to four men in Cornell Capa's show. Robert Capa, Bischof, David Seymour and Dan Weiner had all died on the job. He also included André Kertész, a star photographer in Paris before the war, who was then working for New York shelter magazines, and Leonard Freed, then in his 20s, who created long picture essays on Little Italy, Jews in Germany, and the Civil Rights movement, and had just returned from Israel's Six Day War. Capa called them all "Concerned Photographers." The New York Times called it an "unusually articulate visual definition of what photojournalism means in our time." As Capa later said, the show proved that when "the work is genuine and deals with the human condition" it could succeed on a gallery wall as well as on the printed page.
Overnight, Cornell Capa invented a new photographic genre. Even though Edward Steichen had mounted his blockbuster exhibition, "The Family of Man," at the Museum of Modern Art in 1955, Cornell Capa proved that Concerned Photography extended beyond that single show, and even beyond the membership of Magnum. The Concerned Photographer traveled around the world. The genre became the seed for an entire museum, the International Center of Photography, which opened in 1974.
With Concerned Photography Cornell Capa also increased the value of Magnum's ever-growing archive. The work of all members, old and new, was Concerned Photography. And such photographs could be exhibited over and over. In 2010, having digitized every photograph in its files, Magnum placed its collection at the Harry Ransom Center at the University of Texas. The price, still undisclosed, was enough to keep the organization afloat.
For more than half a century, Magnum photographers showed us the importance of picturing the human condition alongside reporting the news. An unintended consequence of their success has been to reduce news stories to a strikingly similar set of images: brave soldiers, weeping mothers, hungry refugees, dirty children, happy election conventioneers, candidates reaching for a wall of hands.
That's not the fault of Magnum. What does photojournalism mean now when everybody with a cellphone can upload pictures for the world to see, or when surveillance cameras provide the most reliable way to document a crime?
More troubling is the fact that with the decline of the press and its demand for relevance, and the rise of the gallery where everything can sell, we have lost the tension between good and good-enough-to-show-the-world. When there were fewer photographers, Magnum admitted only the best to its club, and we trusted it to be our gatekeeper. Now we live in a world without Life magazine, but with too many pictures. What form of photojournalist will emerge from these conditions? Who can make images for the digital world that will show us something we can't see without them?
Ms. Panzer is a photography writer in New York.